The Price of Energy 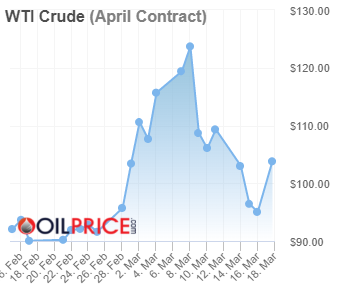 With the price of gas at all-time highs, we all feel the pinch at the pumps. But what is behind the price push and how much further will it go?  We have all seen the price rise and fall over the years but every time it goes up it fails to return to its previous levels. There are several factors involved and more recently with the onset of war in Ukraine it has our pockets getting squeezed drop by drop. With all the sanctions imposed by the West they failed to impose energy/oil sanctions, so when a barrel of oil hit a high of over $120 the pumps reflected this within a couple of days. Russian companies like Lukoil and Sberbank, which are publicly traded companies on U.S. exchanges, have been halted.

The U.S. is not as dependent as Europe is for Russian energy. In fact, Europe imports nearly one third of its energy from Russia. Albeit the freeze by Germany on the Nord Steam 2 pipeline seems rather disingenuous considering it will likely continue once the conflict is over, (Nord Stream 1 pipeline is still in operation). 1 Russia generates nearly 5 million barrels of oil a day and even the almighty oil rich Middle East would be hard pressed to make up the difference. To put it plainly, Russia is an energy juggernaut and their energy is needed for much of Europe and the world, they are just too important.  At this point the U.S. has banned the import of Russian oil, liquefied natural gas, and coal into the United States. 2 The Russian energy sector has been largely sparred with little to no sanctions with the dependence of Europe on Russian energy. So, while the war rages on so does Russian energy.

By most accounts there was a general feeling that there would be sanctions on Russian energy exports which led to the massive spike of crude oil only a week ago. With the realization that sanctions aren’t on the table for Russian oil there was an about face on the price per barrel. The market price for a barrel of oil has since fallen off record highs and into Bear market territory but we are still paying at near record levels. So, what gives? President Biden recently made a statement recognizing this injustice saying he thinks the oil companies are padding their profits on the dime of the American people 3. One analyst believes it may be that current prices reflect the price the gas stations paid days previously and have to recover their investment at that price.

There was a surprising uptick in the electric vehicle market at the same time crude oil was surging. 4    The correlation seems to be that investors may believe the renewable energy sector looks more and more appealing by the day. As oil becomes scarcer and demand for energy increases the outlook for renewable energy and the companies’ providing goods and services in that sector could be a honey pot in the near future. Let’s not kid ourselves, there is a reason it’s called black gold. We are addicted to fossil fuels and everything petroleum based. However, there is a limit to what is available in the ground and with Global Warming in the backs of our minds we are well aware that all good things must end. So, the renewable energy sector looks like the wave of the future for the world and investors.

With current gas prices forecasting to increase through the summer months, many are betting on companies like Tesla (TSLA), Ford (F), General Motors (GM), and Volkswagen (VWAGY) to continue accelerating EV production. Including stocks associated with the production of EV’s, like Albemarle (ALB) and Livent Corp. (LTHM) which manufacture the raw materials into battery grade lithium. According to Benchmark Mineral Intelligence, an index of lithium prices has climbed 59% since April 2020, prompting Albemarle, Livent and Chile’s SQM, to increase production. 5

Chevron (CVX), Devon Energy (DVN), Marathon Oil (MRO) and Occidental Petroleum (OXY) have seen  massive gains starting back in late September 2021 when pandemic era restrictions started to relax. To date these companies have seen upwards of 100%+ stock price increases in the last six months alone.  With the war in Ukraine and Summer around the corner we can expect to see fuel prices continue the trend for some time. With the Clean energy revolution still in its infancy it will take a back seat to carbon fuels and we will have to deal with high costs of fuel, which in turn lead to higher prices of just about everything.

Its been turbulent to say the least and we can expect wild price swings the next few months. Remember…. buy low and sell high! Keep your ear on the pulse of the world and markets. The information is out there and we’ll do our best to bring it to you.